We’re a month away from a new Star Wars film that’s apparently so incredible, Lucasfilm is giving director Rian Johnson his own personal Star Wars trilogy to play around with. With hype for the eighth installment of the Skywalker saga at a fever pitch, whet your space opera appetite with a series featuring some of the strangest films inspired by George Lucas’s opus. First on deck is the 1985 animated feature Starchaser: The Legend of Orin. 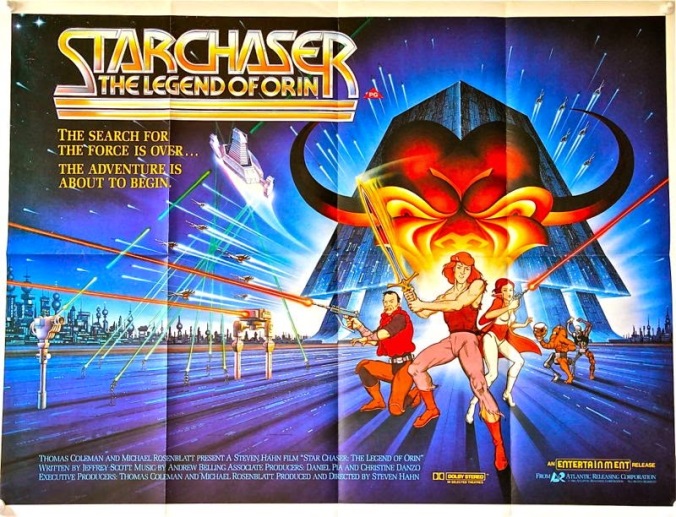 Directed by Steven Hahn and written by Jeffrey Scott (Superfriends, Muppet Babies), Starchaser is essentially the store-brand equivalent of the original Star Wars trilogy, the Sam’s Choice to the OT’s Pepsi. To wit, here’s a tale of a brave but reckless young worker who discovers a magical sword that once belonged to a band of warriors. With the aid of an arrogant outlaw, the courageous daughter of a ruler, and a pair of bickering machines, the young man comes of age and fights a cybernetic warlord. It’s not just the basic story either. Certain shots, set-pieces and even sound effects have been pilfered, almost verbatim, from the classic trilogy (pay close attention to the sounds of the titular starship’s engines as it flies by the camera).

On the plus side, the movie looks good. The animation is fluid and highly expressive in a Rock & Rule/Heavy Metal sort of way and the overall art design, though conventional, shows a good deal of skill and pulp sci-fi influence. By far, the most intriguing designs belong to the flesh-harvesting Man-Droids, who look appropriately nightmarish in their only appearance in the film. For that matter, there are times where Starchaser feels more like a family friendly Heavy Metal, especially in scenes involving Dagg Dibrimi (Carmen Argenziano), the amoral space pirate who could give Captain Sternn a run for his money in the sleaze department. The film seems to find its real voice when it drifts away from its routine nature-versus-technology plot and into these crasser moments.

On balance, Starchaser holds up fairly well. It’s incredibly simple but its infectious zeal and breathless momentum keep it from getting boring. Don’t let the somewhat derivative story keep you away from checking out this visually appealing animated space opera.