Gary Kurtz, the legendary producer of many classic films including American Graffiti, The Dark Crystal and the first two Star Wars films, recently passed away at the age of 78. For a filmmaker with a handful of projects under his belt, Kurtz certainly left a positive impact in cinematic history through his collaborations with some of the most influential creators in entertainment, such as Walter Murch, Jim Henson, Francis Ford Coppola and George Lucas. In 1989, Kurtz attempted to regain the success he earned in the sci-fi genre with the subject of this review but the film in question flopped at the box office and languished in B-movie limbo ever since. We’ll find out if it deserves that fate as we take a look at the post-apocalyptic adventure Slipstream. 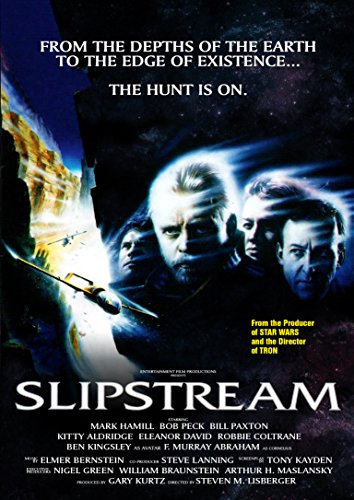 Set after a man-made Armageddon known as the Convergence, the story of Slipstream feels like an amalgam of Blade Runner’s philosophical gravity, as demonstrated by its Scripture-quoting android hero Byron (Bob Peck), and Mad Max’s focus on the lives of the many denizens of its apocalyptic setting and the consequences of the actions of a prior generation, which is best illustrated by a Ben Kingsley-led cult that worships a powerful windstorm that appeared after the Convergence. At times, this combination gives the film a disjointed flow that doesn’t fully solidify its themes, which isn’t helped by the low-key direction of Tron producer Steven Lisberger. The film is largely carried by a few enjoyable performances, most notably the somewhat fascinating chemistry between Peck and Bill Paxton’s bounty hunter character Matt and an intriguing appearance by the ever-underrated Mark Hamill as the dangerous cop Will Tasker.

Does Slipstream deserve its reputation as an inert box office bust? I don’t think so. The film has a unique visual appeal, a wonderful score by Elmer Bernstein and it presents some genuinely compelling ideas about where humanity is headed. If you’re looking to get into post-apocalyptic sci-fi, Slipstream is a pretty decent introduction to the genre.