April 26th is Alien Day, a celebration of the insanely popular sci-fi horror film franchise, Alien. Debuting in 1979, Dan O’Bannon and Ronald Shusett’s spine-tingling tale of the USS Nostromo’s fateful encounter with an astronomic apex predator that would eventually be dubbed the Xenomorph has endured and influenced several generations of science fiction storytellers and analysts. Of course, much like the Star Wars phenomenon, the immediate impact of Alien spawned a slew of low-budget imitators that copied the film’s moody aesthetic, used future sensibilities and intense action. 1981’s Galaxy of Terror, produced by reputable independent filmmaker Roger Corman and helmed by Hammer director Bruce D. Clark, is a notable knockoff that attempts to aim for loftier heights but is somewhat curtailed by its desire for shock value. 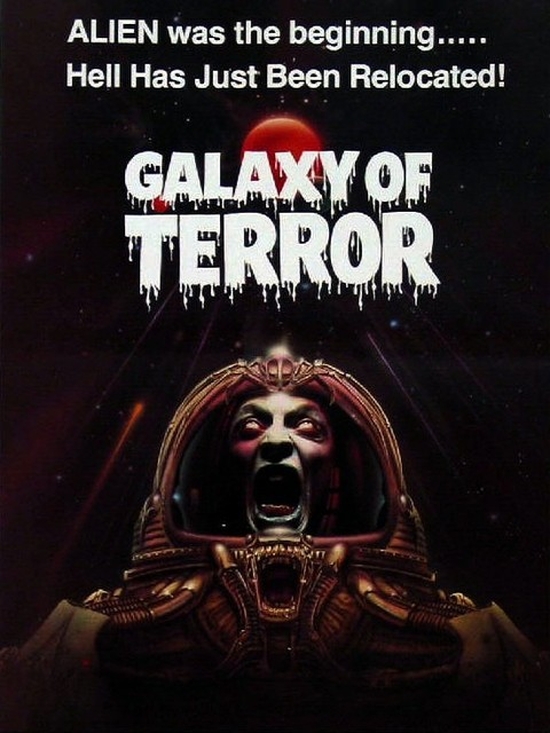 Hell had to make room for the new jacuzzi.

Like Alien, the appeal of Galaxy is reliant on the chemistry of the cast. If Galaxy has a definitive strength, it’s in the performances that slightly elevate the film above the level of a typical B-grade schlockfest. Grace Zabriskie, as the starship captain leading the rescue mission that kicks off the plot, gives a somewhat haunting portrayal of an officer who survived a disaster and seeks to maintain control of her new crew. Other standouts include Ray Walston as the enigmatic cook of the crew, a pre-Nightmare on Elm Street Robert Englund as a technician, Bernard Behrens (Obi-Wan Kenobi in the NPR Star Wars radio dramas) as the mission commander, and Erin Moran (Joanie from Happy Days) as the ship’s empath. The film is also carried by some pretty impressive practical effects, featuring some of Aliens director James Cameron’s earliest production design work. Unfortunately, these fascinating elements are mixed in with a story that’s both barebones and scattershot, often indulging and wallowing in every horror and space opera cliche in the book. This lack of focus is best exemplified by a strange framing device involving a being called the Planet Master that feels like a weak stab in the direction of more thoughtful sci-fi in the vein of Forbidden Planet and 2001 and robs a bit of mystery from the suspense.

Despite its haphazard approach, Galaxy of Terror is an enjoyable piece of low-budget cheese that’s more than just James Cameron’s demo reel for Aliens and Terminator. There’s enough imagination on display that makes it stand out in the realm of cheap, Alien-influenced exploitation films.