Today marks the 80th anniversary of the release of the 1939 cinematic classic The Wizard of Oz! The momentous, Oscar-winning musical fantasy film is the most well-known adaptation of L. Frank Baum’s revered 1900 children’s novel The Wonderful Wizard of Oz but ever since the release of the Victor Fleming film, there have been countless reimaginings of the tale of Dorothy Gale’s journey into the whimsical land of Oz, including television shows, novels, comics, plays, games and several other films. Today, we’re going to take a look at a particularly strange reworking of the original Oz story called The Wizard of Mars, a 1965 sci-fi adventure featuring the legendary character actor John Carradine in the eponymous role. Is Carradine’s involvement in this project enough to make it worthwhile? It’s hard to say. 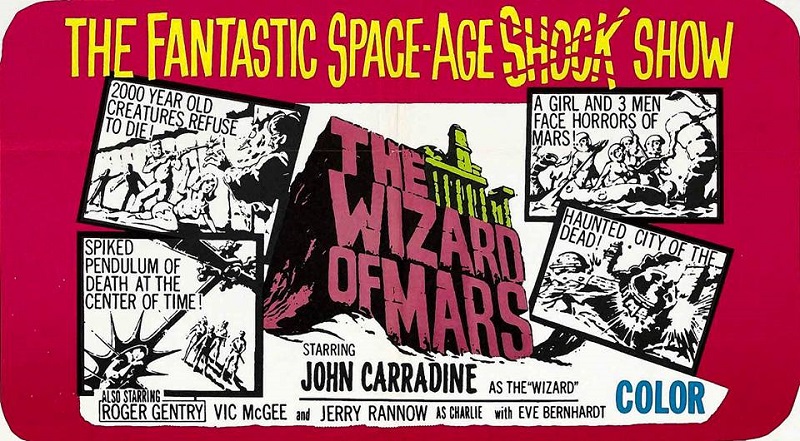 Also known as Horrors of the Red Planet, Wizard of Mars takes place in the far-flung future of 1975, where a crew of four astronauts (including a crewwoman named Dorothy) crash land on a very Earth-like vision of Mars and encounter various hazards before following a golden pathway that leads to an abandoned city inhabited by the fearsome collective consciousness of a Martian hive mind played by Carradine. Of course, the saving grace of Mars is Carradine’s monologue near the end of the film about the hubris of the Martians, which brings a small amount of thematic gravitas and grandeur to such a low-budget production while also highlighting how deeply flawed the rest of the film is. David L. Hewitt’s direction and the performances from the rest of the cast are as heartless as the Tin Woodman, the visual effects are predictably cheap and the script is so brainless, the Scarecrow could poke some holes in it. Perhaps the most interesting tidbit regarding the production of Mars is the fact that Forrest J. Ackerman, the illustrious literary agent and science fiction writer who is best-known as the editor of the influential horror film magazine Famous Monsters of Filmland, was chosen to be the film’s technical advisor.

If you have the leonine nerve for low-budget sci-fi, The Wizard of Mars may not be a wickedly satisfying trip but there are a few things that make it notable. Naturally, you have to decide that for yourself. Just pay no attention to those strings holding up the spacecraft.