The Star Wars universe is a setting that’s ripe with comedic potential. From the strange visuals to the quirky dialogue, there’s a lot of material to work with. Luckily, most fans respond to the weirdness with a lot of good-natured ribbing. The cult status of Mel Brooks’ full-blown parody of Star Wars, 1987’s Spaceballs, is only one example of the numerous riffs on the franchise. The Ice Pirates, released in 1984, represents a somewhat unique way to cash in on the popularity of Star Wars: instead of a straightforward quest, this would be a more self-aware and comedic adventure, akin to a Guardians of the Galaxy prototype. The results of this bold experiment are mixed to say the least. 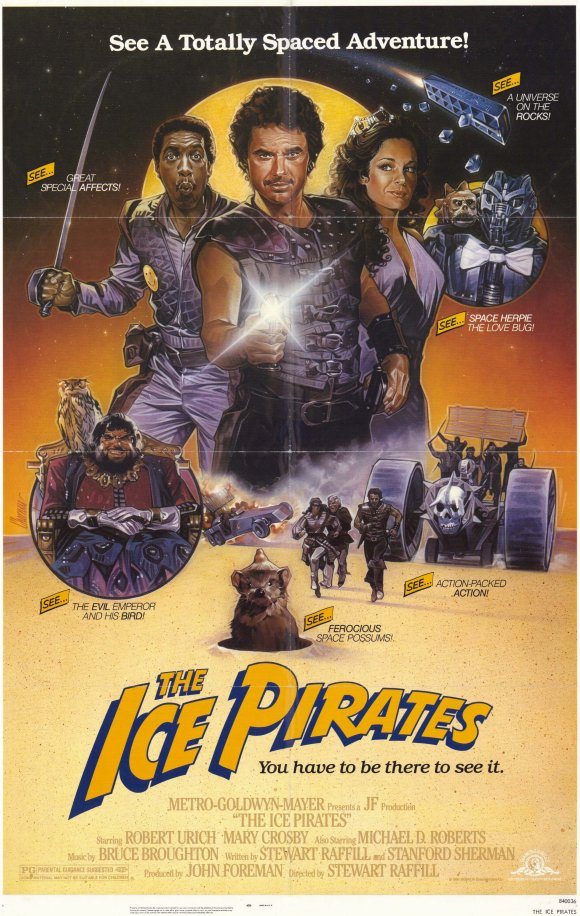 You know the Emperor’s evil because he wrote the Star Wars Holiday Special!

Directed by Stewart Raffill (who also helmed the infamous E.T. imitation, Mac and Me) and written by Raffill and Krull scribe Stanford Sherman, the film’s self-evident premise of ice smuggling sounds like the setup to a variety show skit. It even looks like some kind of sketch with the cryogenic corsairs in question, looking like denizens of a post-apocalyptic Age of Sail, battling a band of space knights who look like they wandered in from a Renaissance fair. Ice Pirates may look cheap but when it comes to its sense of humor, it hits more than it misses. Despite a few awkward gags that feel like they’re filthy for the sake of being filthy, most of the jokes make very clever use of its setting, especially in its imaginative final battle in the middle of a time storm where machines fight the rapidly aging pirate crew.

Overall, Ice Pirates is a strange beast of a movie that might be better appreciated now in the days of constant Star Wars riffs and memes than when it was released for giving viewers a much weirder approach to the space opera genre. It plays things somewhat cynically but it has all the right ingredients that make a cult classic.